The Mystery of Llywelyn ap Gruffudd


The Mystery of Llywelyn ap Gruffudd

Llywelyn ap Gruffudd is typically seen as the most powerful of all the medieval Welsh princes. He has been the topic of a number of academic studies, including J. Beverley Smith’s book Llywelyn ap Gruffudd: Prince of Wales. The image portrayed of him is that of a renowned warrior in his earlier years, and a great state builder during the creation of the Principality of Wales. Yet, there remains a number of questions about this somewhat elusive prince. 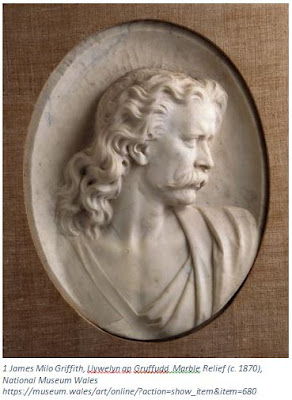 One of the most baffling, but simultaneously the least discussed, appears to be the fact that Lwelyn failed to marry until very late in his career. Smith notes this as ‘one of the most puzzling questions’ that comes up when looking at the life of the prince.  Not only this, but Llywelyn also did not have any illegitimate children (at least as far as we know) – which, for a Welsh prince, was quite a rarity, if not unheard of. He appears not to have had difficulty in fathering children, as the birth of his daughter in 1282 demonstrates, but this raises more questions than it answers. Contemporary sources are, for the most part, rather limited, at least in comparison to other places in Europe at the same time. As such, there is very little that can be said for certain about why Llywelyn made this decision, which so obviously jeopardised his achievements and his principality. However, speculation may lead to some insight not just as to one of the great mysteries of Llywelyn ap Gruffudd’s life, but also as to the way that historians perceive and subsequently treat the idea of homosexuality, particularly in the medieval era.

The idea of a medieval ruler being gay, or even bisexual, at first glance often sounds far-fetched, even to an open-minded historian. In many cases, the biggest argument against such a suggestion may be that there simply is not enough proof – which is indeed a valid concern, but a lack of overt evidence does not necessarily mean that everyone at this time, including rulers, were heterosexual. However, especially for nobility, marriage was often a political endeavour rather than a romantic one. Llywelyn, having lived through the turmoil of the succession crisis after his grandfather’s death, would have been acutely aware of the dangers that a troubled succession could bring. This swung both ways – too many heirs, such as the case with Owain Gwynedd, for example, would almost certainly lead to contested succession and bloodshed among those grappling for their father’s power. On the other end of the spectrum, having no male heir at all could lead to the endangerment and even disappearance of an entire political entity or dynasty.

Llywelyn would have experienced these harsh truths throughout his life, and yet he appeared to have been in no real rush to marry or to father children at all; his focus seemingly being on his military and political endeavours. His own letters are littered with reminders of the fact that the prince’s hard-won principality was likely to fall into the hands of the king were he to ‘die[s] without heirs of his body’.  And yet, his decision to marry Eleanor de Montfort only came truly into effect sometime after the discovery of a failed plot in 1274 by the prince’s own brother, Dafydd, and Gruffudd ap Gwenwynwyn of Powys to murder Llywelyn and install Dafydd as prince in his place. Historians acknowledge that this event likely brought into perspective the fragility of Llywelyn’s power without an ‘heir of his body’, but this does not explain why it took him until well past middle age to marry in the first place.

Was Llywelyn ap Gruffudd gay, or even bisexual, and did this contribute to his apparent apathy around finding a wife until the issue of succession became more crucial? Was this why he put off committing to marriage until the final few years of his life? It cannot be proven or said confidently, but it is one theory amongst a relatively small group of others. Despite this, the key may be determining whether such a lack of evidence stems from the impossibility of such a thing, the difficulties surrounding evidence for medieval Wales in general, or the secrecy that would likely surround that fact were it to be true. Indeed, running themes of secrecy and elusiveness are to be found when attempting to analyse any aspect of Llywelyn’s personal life and inner world. The fact that the mere suggestion that Llywelyn could have been gay or bisexual is unlikely to be taken seriously, however, is perhaps more of a reflection of the subtle bias that remains amongst academics against seriously exploring sexuality in the pre-modern age.

Speculation and assumption is always a dangerous game in any field, not just history, but in this case it can provide an interesting take on the way that historians could disregard the role that sexuality may have played in the lives of people in the medieval period.