A History of Female Infanticide in China

Female infanticide, along with foot binding, is one of the most infamous and darkest aspects of Chinese culture. The practice is ancient and its exact origins still remain unknown. Though the practice cannot be condoned, there remains some ‘method in the madness’. Up until the early parts of the 20th century, Chinese society was almost exclusively agrarian. This meant that most people’s livelihoods were dependent upon being able to do farm work, or living with someone who could. Since men, stereotypically, are considered more suitable for manual labour than women, Chinese society developed a preference for male babies. This preference of boys over girls is strongly ingrained in Confucian culture. Since women were not expected to do anywhere near the same amount of work that men did, girls were considered a burden and another ‘mouth to feed’ until they were married off to a, hopefully, well-off family. In ancient Chinese history, this preference manifested itself as the phenomenon of female infanticide that we are familiar with today.

With regards to religion, China’s three primary faiths (Confucianism, Taoism and Buddhism) all differ on their stance towards female infanticide. Because Confucian culture is predominantly patriarchal, Confucianists are more tolerant of the practice. They are in direct conflict with the Taoists who are firmly anti-infanticide as they believe that the murder of anyone, including little girls, would be to contradict ‘the way’. The Buddhists, however, are torn, primarily because of their belief in a notion of re-incarnation. On one hand, they believe that the little girl would be re-incarnated elsewhere and so there’s no fear of wasting a life. On the other hand, they also acknowledge that taking a life, innocent or otherwise, would bring them negative karma.
Since the arrival of Christian missionaries in China in the 1500s, knowledge of female infanticide has spread to the West. The early 17th century Italian Jesuit Matteo Ricci witnessed the practice during his time in China and reportedly saw newborn girls drowned in local rivers. Later, in the 19th century, French Jesuit Gabriel Palatre and the Annales de la Sainte-Enfance reported similar sightings across both the south-western and the south-eastern provinces. After the Xinhai Revolution of 1911, both the KMT (Kuomintang) and CCP (Chinese Communist Party) governments have worked to try and reduce the prevalence of the practice.

Despite a considerable decline in the 20th century, a modern incarnation of female infanticide resurfaced in the 1980s with the introduction of the one-child policy. Due to the continued prevalence of male babies being favoured over female ones, the one-child policy sparked a rise in the amount of gender selective abortions. Couples would abort the baby before it went to full term and then try again for a boy. In response to this emerging phenomenon, the policy was reformed in 1984; couples whose first born child was a daughter would be allowed to have a second. 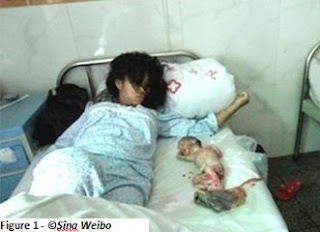 One of the more disturbing ways the one-child policy was enforced was forced abortions. In June of 2012, a woman from Shaanxi province was forced to have an abortion after being unable to pay the ¥40,000 fine for violating the policy. After explaining to the authorities that she and her husband would be unable to pay the fine, Feng Jianmei claims she was forced into signing an agreement to have an abortion. Witnesses claim that she was removed from her home with a pillowcase over her head by four masked men. The next day, Feng was injected with an abortifacient to induce a stillbirth. A week later, Feng’s family posted to the blogging website Sina Weibo an extremely graphic image of Feng in a hospital gown lying next to the stillborn corpse of her daughter. The image rapidly spread across Chinese social and sparked outrage amongst the public. In response to this incident, two officials from the National Population and Family Planning Commission were fired and five others were disciplined. The one-child policy has had a disastrous effect on China’s population statistics; there are between 10 and 15 million ‘missing women’ which has led to an extremely uneven gender ratio in the general population. The lack of women has caused some serious sociological problems in Chinese society. Less women means fewer potential wives, which has fueled a rise in gender-related violence as well as an increase in sex trafficking and prostitution.  This, in turn, increases the risk of HIV and AIDS.

There is a theory, however, that the demographic problems may not actually be as bad as they appear to be. It is possible that, particularly in the rural parts of the country, the births of girls may actually have happened but were not officially recorded in fear of violating the one-child policy. These are the hēiháizi or ‘black child’. These are people who are not registered in the hùkǒu, the system of household registration. This means that those 30-35 million girls do actually exist but exist as hēiháizi and therefore are unknown to the government.

In the last 25 years, a series of documentaries have been produced about female infanticide, the one-child policy and their impact on Chinese society. The Dying Rooms (1995) and its follow-up film Return to the Dying Rooms (1996), both detail the lives of children who were abandoned by their parents as a result of the one-child policy. The filmmakers claim that the unwanted girls were left to die of neglect, allowing the parents another chance at producing a boy. Sixteen months after the first documentary was released, two members of the production team claimed that the film was ‘wholly exaggerated’ and was made ‘almost completely without substance’. Over 15 years later, another documentary titled It's a Girl: The Three Deadliest Words in the World (2012) was still examining the sociological effect of female infanticide in both India and China.