A Female Force to be Reckoned With

Margaret Beaufort; a woman of great historical significance, yet also strangely lacking in academic appreciation. A woman who pursued and achieved her own ends, yet is overlooked as an illustration of female agency within a society where women were typically, and erroneously, assumed to have had none. A woman who is probably better known for her role in historical fiction than in historical reality, more for her intense piety than her role as one of the most prominent players of the turbulent fifteenth and early sixteenth centuries. 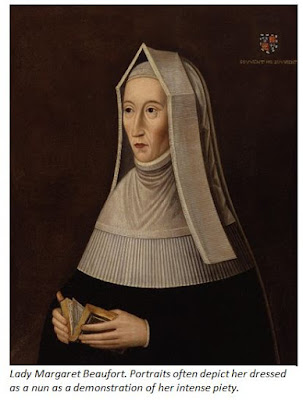 Margaret was a woman who, during her long life, was a first-hand witness to the tumultuous years of the Wars of the Roses. Through her efforts, she helped establish the infamous Tudor dynasty in the name of her son, who would become Henry VII of England. Married at twelve to Edmund Tudor, both widow and mother at thirteen, Margaret was a woman who refused to remain idle. She negotiated, integrated, and plotted herself towards success. She risked her life and reputation in her son’s cause, though it is impossible to fully distinguish between it and her own. However, she was also a woman who achieved these things without stepping outside the lines of her accepted sphere as a woman. She was no Margaret of Anjou, ‘interfering’ in matters of government and stomping on the toes of powerful men. She remained, for the most part, behind the scenes, yet also often in plain sight.

An adroit Lancastrian, she integrated herself into the Yorkist court, making connections, forming networks, and working towards a greater goal. Her ‘invisibility’ was perhaps one of her greatest assets, allowing her to establish herself surreptitiously before revealing the extent of her efforts in her son’s triumph at Bosworth Field in 1485.

In many ways, it is easy to over-complicate Margaret, primarily because we often find it difficult to reconcile medieval female experience with the non-domestic. The political triumph of her later years has traditionally been in conflict with her intense religiosity, and scholarship has frequently been divided into two camps; those who celebrate her as an exemplar of piety, and those who condemn her excursions into the ‘masculine’ politic.

However, these approaches typically share two common misconceptions. Firstly, that the domestic had no impact outside the privacy of the household, and secondly, that the political was strictly concerned with matters of government. This, it turns out, was far from the case. The households of medieval noble families were often hubs of activity branching off from the wider context of the royal court. Here, factions grew from close family networks, reinforced through marriage alliances, patronage and feudal hierarchy. The domestic was often far from the private, and in a society where the future of the collective typically outweighed that of the individual, the family was a significant source of agency and power available to men and women alike, albeit often in different ways.
Within this context, the political entailed far more than matters of government. It extended to the intimacy of the marriage bed, the raising and education of children, and the creation of kinship networks, all of which would contribute, directly or otherwise, to the political fabric of the nation. The domestic was a socially acceptable context in which female agency could thrive, and it would be where Margaret would establish the foothold which would ultimately enable her to pursue her own ends.

One of the most obvious means available to her was marriage. Within the medieval context in particular, marriage has received a lot of bad press, thanks to persistent focus on what is perceived as female subjugation. Whilst women certainly did not enjoy equal status with their husbands, the over-generalised assumption that all women suffered as a result of arranged matches and masculine abuse has meant that it is typically seen in the negative, rather than as a potential tool which women often readily employed to their own ends. Marriage itself did not typically carry the same connotations as it does today, and within noble and gentry families in particular, it was understood more as a business arrangement than as a result of mutual love and affection. Whilst these things might develop during the marriage, and some did indeed marry for love, they did not constitute the primary factors when considering potential matches.

For Margaret, marriage offered security and a means of advancing both her own interests and those of her son. By the time Henry was born in 1457, she was already a widow, and aged just thirteen, she recognised the need to remarry quickly. Her latter two marriages, first to Henry Stafford, second son to the Duke of Buckingham, and secondly to Thomas Stanley, a prominent member of the Yorkist court, were pursued and arranged by Margaret herself. They provided her with a safe haven and a legitimate means of advancing her cause through interaction and association with other powerful nobles. Her marriage to Stanley in particular allowed her access to the inner circles of the Yorkist regime, and she would spend the twelve years from 1271 to 1483 integrating herself behind enemy lines.

Motherhood too allowed Margaret to operate within the political in a socially acceptable way. For noble and gentry women, children, particularly sons, provided them with a stake in the great game of court politics, and Henry Tudor afforded his mother opportunities for agency long before he acceded to the throne. Through her son, Margaret had a legitimate cause to pursue which would ultimately draw people to their side prior to 1485. Whilst Henry would spend most of the first half of his life either as the ward of another or in exile, his identity as potential, albeit weak, claimant to the throne meant that, should the Yorkist regime fail, or be overturned, Margaret’s son might well be looked on as an attractive alternative.

However, whilst the Yorks remained in power, it was also a dangerous position for Henry.  History does not tell us exactly when Margaret’s ambitions transitioned from bringing her son home from exile to placing him on the throne of England, if they had ever been otherwise. What we can suggest though is that Margaret played the game well, not revealing her hand or overtly stating Henry’s claims. We also know that, at least by the time Richard III seized the throne in 1483, she had begun to plot his downfall with other nobles, most notably the Duke of Buckingham, who also had a claim to the throne, and Elizabeth Woodville, the widow of Edward IV.

Following the disappearance of Edward’s sons in the Tower of London, Margaret and Elizabeth came together to arrange the marriage of their children, Henry Tudor and Elizabeth of York. The plan was that Henry would take the throne and, in order to bolster his shaky claim to it, marry Elizabeth.  In return, her mother, Elizabeth Woodville, would pledge her support to Henry’s cause. Together, the plotting of these two powerful women demonstrated the significance of established networks in promoting female agency. 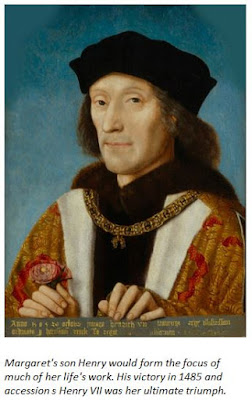 Whilst initial attempts to unseat Richard were unsuccessful, Henry Tudor would go on to secure his infamous victory at Bosworth Field in 1485, taking the throne as Henry VII, the first monarch of the Tudor dynasty. Following this, her ultimate triumph, Margaret became an active and prominent figure at her son’s court. She was referred to as ‘My Lady the King’s Mother’, and would come to enjoy legal and social independence which most other married women could not. Henry’s first parliament recognised her right to hold property independently of her husband, and towards the end of his reign, she was given a special commission to administer justice in the north of England. Following Henry’s marriage to Elizabeth of York, she was reluctant to accept a lower status, and wore robes of the same quality as her daughter-in-law, walking only half a pace behind her on official occasions. She would sign her name Margaret R., perhaps to signify her royal authority, with R. standing potentially for regina – the Latin word for queen customarily employed by female monarchs.

Margaret’s story not only demonstrates the potential for agency available to women, but also raises questions as to how these women have been recorded and studied. That Margaret receives little attention within the primary documentation prior to her son’s reign might suggest to some that she had little involvement in the politics of her day. I however would challenge this approach by suggesting that she had little direct involvement in matters of government. Historians have since come to appreciate that the political went far beyond the governance of the nation i.e. the type of politics that primarily left its mark on written documents. Today, we can suggest that Margaret’s relative obscurity was more a result of her operating behind the scenes than of her absence from the political landscape. That she pursued and achieved her ambitions is testament not only to female opportunity, but also to how far a woman could and would go.

However, Margaret is far from being a unique case. Whilst her ultimate triumph draws more attention to her experience than many other individuals, her story is also an entreaty for adopting a similar approach to the study of other noblewomen in the past, women who had comparable access to similar modes of agency. Furthermore, it demands a reconsideration of approaches to medieval marriage and motherhood, and a redefinition of the domestic. Whilst Margaret was indeed a pious woman and a learned scholar, she also operated on a similar level to so many other women. Marriage and motherhood should no longer be understood solely through the lens of female subjugation, but also through those of female opportunity.

Margaret’s participation in the great political game as both wife and mother enabled her to establish herself as the matriarch of one of the most infamous royal dynasties in history. It is therefore strange that she has not received much attention in scholarship. However, as history, and women’s history in particular, continues to develop and to reshape approaches to the past, it can be hoped that she will finally get the recognition she deserves as one of the most successful political players England has fostered.