The popularity of queer theory in the historical discipline has steadily increased over the last few years, but it is not a new approach to the past. Thirty-five years ago, Eve Kosofsky Sedgwick published Between Men: English Literature and Male Homosocial Desire (New York, 1985) and it is widely recognised as one of the foundational works for queer theory, particularly thinking about male sexuality. In the monograph, much of her argument is structured around an asymmetrical erotic triangle wherein men who desire each other (sexually or otherwise) transmit that desire through a woman, thus creating a triangulation. This trope, Sedgwick argues, was commonplace in literature from the pre-modern to our own contemporary. According to Sedgwick,

For Sedgwick, the beloved – almost always a woman – then becomes the object, or conduit, of relationships between two rival men. The rivalry creates a common cause: to win the heart of the beloved, but their rivalry relationship is just as strongly desired as the desire for the object of their infatuation. For Sedgwick, then, homosocial desire – encompassing platonic friendships, affection, sex, and more – is a given amongst men within the triangle. As a result, the homosocial is drawn back into the orbit of ‘desire’, of potential eroticism, and creates not a binary of sexuality and gender, but an unbrokenness of a continuum between homosocial and homosexual, and thus broadens our understanding of sexuality.

‘like a parke, paled with pales of white and grene, wherein wer certain Fallowe Dere, and in the same parke curious Trees made by crafte, with Busshes, Fernes, and other thynges in likewise wrought, goodly to beholde. The whiche Parke or diuyse, being brought before the Quene had certain gates thereof opened, the Dere ranne out thereof into the Palaice’.[2]

The pageant-like [3] issuing a challenge to all comers. This challenge was answered by eight servants of Diana.[4] A deal was struck between the two groups of men: whoever vanquished the other group of knights in their ‘dedes of armes’ kept the deer that were killed and the greyhounds that helped kill them. After the challenge was accepted Queen Catherine called for her husband, Henry VIII, to oversee the competition and to ensure the rules were fair.
performance continues with eight mounted knights calling themselves the scholars of Pallas

This scene was very much for entertainment, it was a make-shift park with trees ‘made by craft’ and it was all set up within the palace. It did, however, have real deer, real greyhounds, and real men, and we should not forget that several deer were killed for the narrative. For our purposes, this episode as described by Hall, can be approached through Sedgwick’s asymmetrical erotic triangle with the two groups of rival knights as the rival opponents chasing the beloved: the deer. Although women are mentioned in the narrative – it is performed in front of Queen Catherine and her ladies – it is not their favour that the knights desire. The deer, at least in this episode, is more important, and I would argue that the violence and bloodshed that came along with the killing of their prize is the activity that helped link the two rival groups together. Moreover, with the deer as the conduit for male homosocial desire it meant that the ingredients for heterosexual desire were not all accounted for: the woman was of course missing. The ladies’ favour as the ultimate prize was usurped by that of the slaughtered animals. With the arrival of Henry VIII to oversee the hunting scene, we get an added element. Not only do the groups of knights want to win the prize of the deer and greyhounds, but they now want to impress their king, who is young, physically fit, and an avid hunter. The goal, then, is to impress other men rather than women. Their ambition to impress the king and win the challenge are the ingredients for creating a situation in which ‘homosocial desire’ can be fostered. The prize is simply an object to be won. The importance of the exchange comes in the form of emotional closeness to the other men in the triangle. Rivalry, competition, teamwork, and physical exertion can all create emotional closeness, and all were needed in the hunt. In this sense, it might be argued that homosocial desire can be obtained outside the parameters of the heterosexual pursuit of the lover/beloved scenario with the woman – the beloved – easily replaced with another object to be won. 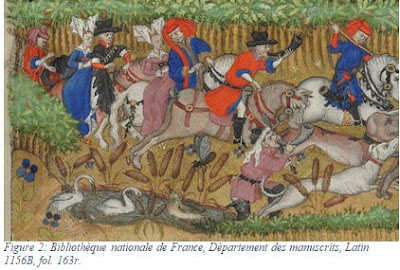 What does the exploration of such case studies tell us about the Tudor period? First and foremost, it demonstrates that a queer reading of the pre-modern past is possible and allows us to see the Tudor court in a new and exciting way. Hunting was one of the most important pastimes that an elite, able-bodied, white, educated man in the sixteenth century could perform, and he needed to perform it well in front of his peers and superiors, usually other men. By applying queer theory to the hunt, we get the sense that it enabled those of the hegemony to perform homosocial desire for one another without stepping outside the boundaries of the expected warrior masculine identity. Being able to perform these pastimes allowed men to become part of the hegemonic power structure at the Tudor court, thus giving them access to high-ranking officials and, more importantly, the king. Secondly, the hunting scene from Hall’s Chronicle demonstrates the role – or lack thereof sometimes – that women played in male homosocial desire. The woman, the ‘beloved’ in the triangle, could quite easily be replaced by an animal. Indeed, in Middle English romance literature the hunt of a deer is often paralleled with the chase of courtly love, both of which liken the ‘prize’ (whether that is the deer or the woman) as an object to be won usually by the pursuer physically exerting themselves in order to prove they are worthy. Thirdly, I do not want to deny the fact that women did hunt and they certainly could be in a hunting party at this time. In these situations, the role of women changes slightly, particularly if they are partaking in the hunt rather than simply spectating. In any case, female homosocial desire and its construction were outside the scope of this short piece; however, I am sure it would prove to be a fruitful endeavour. Finally, to reiterate the fact that ‘homosocial desire’ does not automatically mean sexual desire.  What this concept does is gives us a broader continuum of sexuality, moving us away from binaries and enables more freedom to understand emotions, bonds, desires, and relationships in the past.

In the thirtieth anniversary edition of Between Men, Wayne Koestenbaum writes in the foreword:

As purveyors of the past, surely we can grant this to the historical figures that we explore.