Rebel Songs of The Troubles

Sean Collier
BA Modern and Contemporary History
hiuac3@bangor.ac.uk
‘Tiocfaidh ár lá, sing up the ‘Ra’ was a chant I often heard in a pub in Bangor, that will go unnamed in an attempt to not write an advert/smear for the pub, depending on your possible love or hate of the occasional rebel song. For the many who are not familiar with the opening phrase, ‘tiocfaidh ár lá’ translates to ‘our day will come’ (or so I’ve read, I am unsurprisingly not fluent in Irish) - a term very much associated with the Irish Republican Army (IRA), referring to a future united Ireland. This is taken from an Irish rebel song named The SAM Song, with the lyrics detailing a Provisional IRA (the ‘Ra’) member and his fight against the British. Ranging from the use of petrol bombs and SAMs (surface-to-air missiles) to the internment of 1971 and hunger strikes, the song is clearly propaganda glorifying the Provisional IRA. However, if songs like this are commonplace in even a small pub in north Wales, their use begs the question of what these songs actually mean. To most it may just be good craic to sing along, but the stories behind the songs are fascinating. As examples, I will talk about two other songs alongside The SAM Song: The Men Behind the Wire and Roll of Honour. 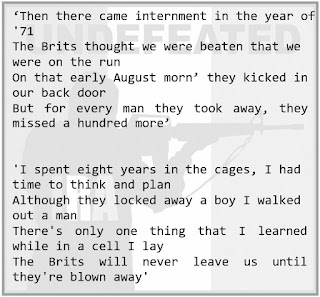 This representation of internment in The SAM Song portrays it almost as a rite of passage for a Provisional IRA member, with the phrase 'Although they locked away a boy I walked out a man'. Defined as the practise of imprisonment without trial, internment was used by the British government in August 1971 to arrest anyone suspected of Irish republican activity, in the hope of restoring peace despite the previous failure of internment following the 1916 Easter Rising. Seemingly, the British government did not learn its lesson from history, instead spurring nationalist sentiment yet again through internment. Also featured here is militant language against Britain, which slots into a theme in rebel songs of portraying Britain as a tyrant.
The Men Behind the Wire also shows this theme:
Strong imagery arises from these lyrics, supporting accounts that have surfaced of men being dragged from their beds in the early hours of the morning and of excessive violence from British soldiers. The song evidently shows no fear of giving a gritty description of the events that occurred during the arrests, brutally portraying the beating of children in front of their mothers. Of course, this shocking depiction features in the song in the interest of portraying Britain as an oppressor of the Irish people. When considering the context of the song’s release in late 1971, the song’s original purpose was to act as a recruitment campaign, fuelling the fire of nationalism by villainising Britain and promoting the Provisional IRA. This is supported by the chorus’ pledge that all should support ‘the men behind the wire’, referring to those interned in British camps: 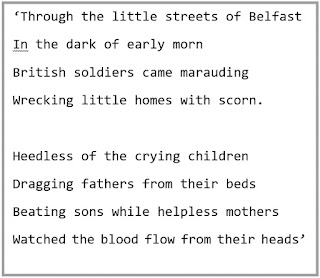 ‘Armoured cars and tanks and guns
Came to take away our sons
But every man must stand behind
The Men Behind the Wire.’
Roll of Honour, however, is much more overt in its villainisation of Britain: ‘England you're a monster, don't think that you have won/ We will never be defeated while Ireland has such sons.’ Note here the reference to England rather than Britain, suggesting a Celtic unity against the English. Unfortunately for Wales and Scotland, England and Britain appear to be synonymous in these songs (on the bright side, the Welsh and Scottish aren’t portrayed as villains!).
This song is also particularly interesting in its portrayal of the hunger strikes of the 1980s:
‘In those dreary H-Block cages ten brave young Irishmen lay


Hungering for justice as their young lives ebbed away,
For their rights as Irish soldiers and to free their native land
They stood beside their leader - the gallant Bobby Sands.’


What initially stands out is the seemingly tasteless irony of ‘hungering for justice’, unless it is just I who sees this dark double-meaning. Nevertheless, this histrionic verse still provides an interesting perspective on the hunger strikes of Maze Prison’s H-Blocks and is an excellent example of the portrayal of Bobby Sands as a modern martyr. The SAM Song also covers this topic of hunger strike briefly, but powerfully, describing the sympathy felt towards the hunger strikers in Belfast: ‘All through the days of hunger strike I watched my comrades die/ And in the streets of Belfast you could hear the women cry.’
Although the crying referred to here could be more accurate if replaced with rioting (if referring to the death of Bobby Sands), there was still considerable levels of sympathy towards the hunger strikers of the H-Block. However, it probably isn’t much of a sing-along verse if you heard it in one of Bangor’s pubs. Most tend to join in for the much catchier ‘ooh, ah, up the ‘Ra’ chorus. Nevertheless, if you are also one of the odd historians that takes interest in the context of a nationalist pub song, at least there is now some information to bore your friends with on a night out if you hear any of these on the jukebox.
at January 13, 2020